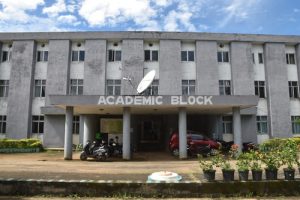 College of Community Science [erstwhile College of Home Science] a constituent college of Central Agricultural University, Imphal, Manipur, located in Sangsangre, Tura, started its first academic session for B.Sc. (Hons.) Community Science [erstwhile Home Science] in the year 2004-05. The first batch of ten girl students hailed from Arunachal Pradesh, Meghalaya, and Manipur, and the academic activities and administrative work were carried out in a temporary building at Dakopgre, Tura. Dr. Rita Singh Raghuvanshi was appointed as the Dean (on deputation), and four lecturers were hired on contractual basis and one joined on deputation during the initial phase. Regular appointments were made in the year following the college’s establishment and in the subsequent years.

In 2006, Dr. K. Sheela was appointed as Dean of the college, and subsequently in 2009, the college relocated its academic and administrative work to its permanent campus at Sangsanggre, Tura. After Dr. Sheela’s retirement in July 2015, Dr. Puspita Das, was appointed as In-charge Dean, followed by the appointment of Dr. Anurag Chaturvedi as regular Dean in December 2016.  Following Dr. Chaturvedi’s resignation in September 2017, Dr. Puspita Das was again appointed as In-charge Dean and she is the incumbent administrative head of the college.

The college currently offers two Undergraduate four-year degree programmes in B.Sc. (Hons) Community Science and B.Sc. (Hons) Food Nutrition and Dietetics, and the curriculum is recommended by the ICAR Fifth Deans’ Committee.Post-Graduate courses in Food Science and Nutrition, and Extension and Communication Management are also offered. Desirous students after completing their 10+2 in Science can get admission to any of the two UG programmes either through nomination by the respective state governments of the North-Eastern Indian states or after clearing the entrance examination conducted by ICAR. Another option is through Open Admission where candidates can apply directly to the college, and selection is based on merit.

There are five main departments in the college – Family Resource Management, Food and Nutrition, Home Science Extension and Communication Management, Human Development and Family Studies, and Textiles and Apparel Designing. A supporting department, Basic Science and Humanities, comprises of faculty who teach the compulsory basic courses.